During lunch time, the yacht sailed from Punta Moreno on Isabela Island to Punta Mangle on Fernandina Island, the westernmost and youngest island in the Galapagos Islands. Because of the active volcanic activity, there is little vegetation on the island. The island is completely covered with volcanic rock. Punta Mangel is a a natural inlet with calm waters surrounded by the mangrove forests. It provides shelters for both marine animals and birds.

Our boat cruised slowly along the coast. There were hundreds of marine iguanas crawling on a rock by the shore. Among them, there was a Flightless Cormorant, hatching baby birds. He barked loudly when he saw us coming, not sure if he was warning strangers approaching or complaining at being surrounded by a group of “monsters”. 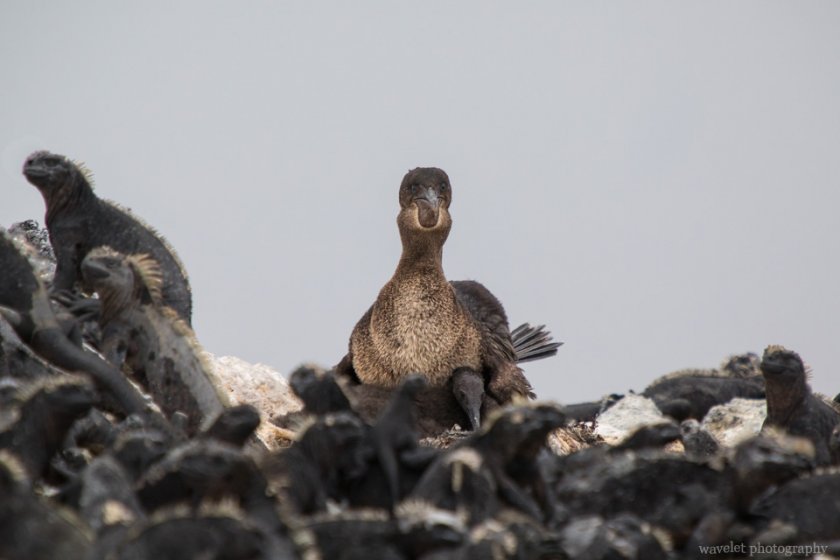 The ancestors of marine iguanas originated in South America and probably reached the Galapagos Islands by drifting for months on tree trunks. Through long-time evolution, the marine iguana’s body has adapted to island life. Although they are clumsy on land, they are very nimble in the sea. Not only can they swim but also dive. Underwater they can hold their breath for an hour and dive 20 meters. Compared with their land-based counterparts, marine iguanas’ mouths become shorter and more rounded at the front, making it easier for them to eat algae attached to rocks. Their tail is thick and strong, which is a propeller for swimming in the water. 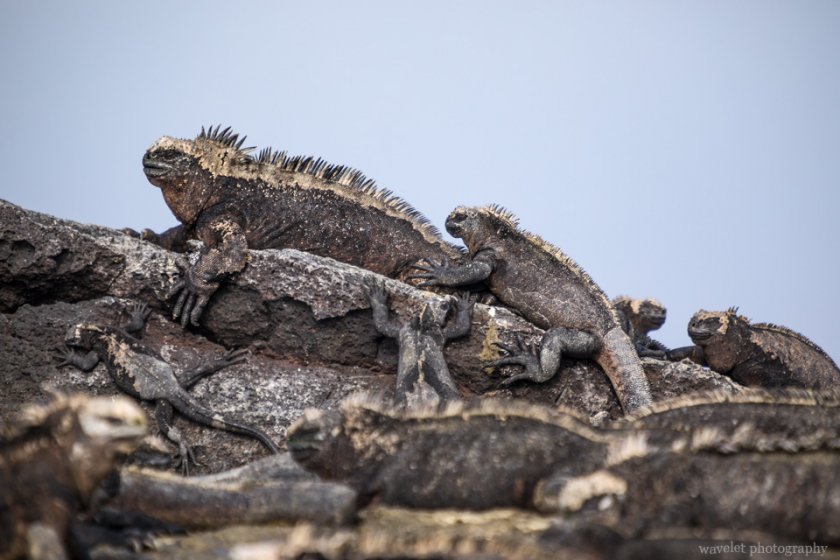 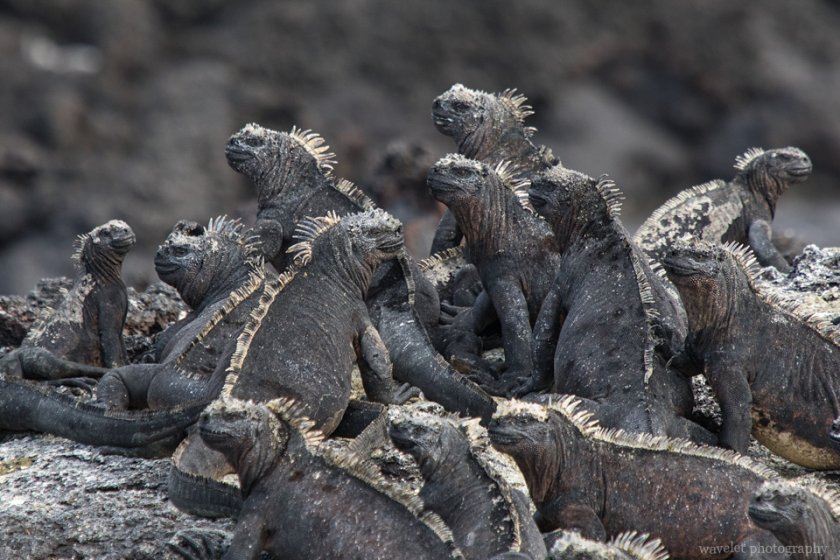 A Galápagos Eagle can be seen on the shrub branch on the shore, Marco says, most of the islands’ flora and fauna originated on the mainland and evolved over time to become endemic species. They are commonly named in one of three ways: prefixing Galápagos-, or Darwin-, or Lava-. Interestingly, after DNA analysis, the Galápagos eagle is a close relative of the Swainson’s Eagle , which started living in Galápagos about 300,000 years ago, which makes it the latest animals to arrive in the archipelago. 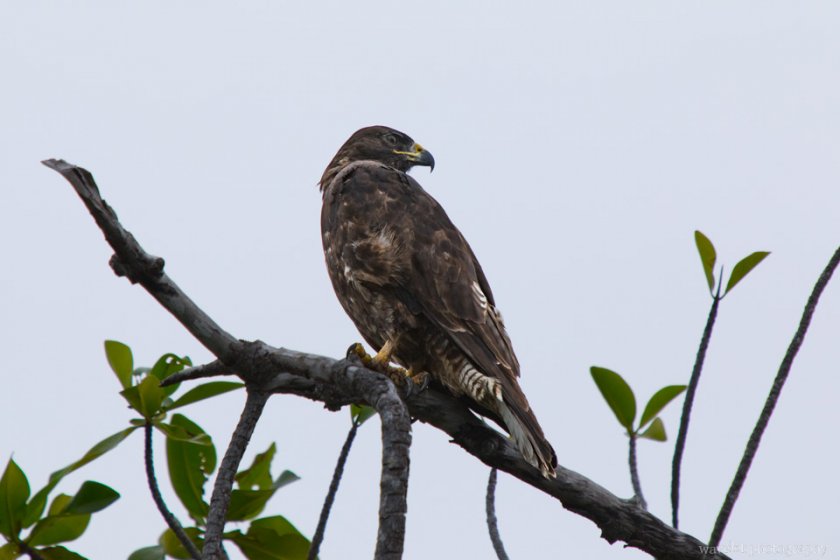 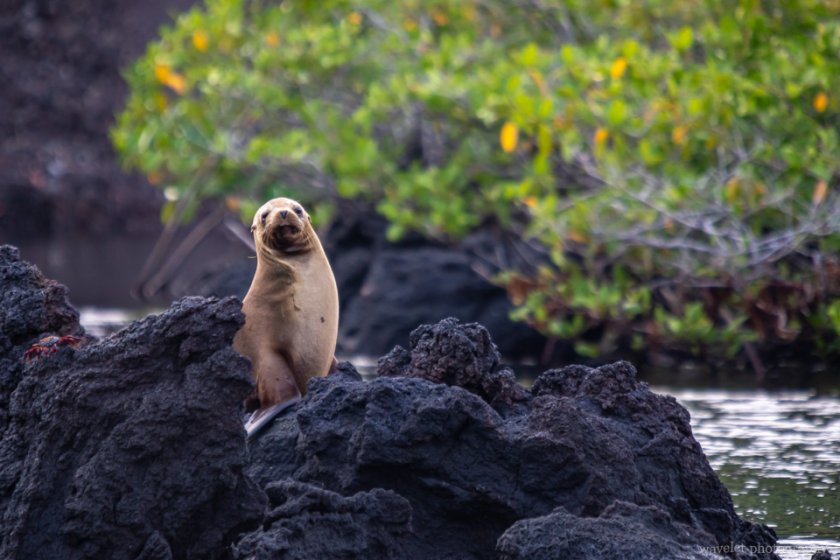 Blue-footed booby can be found throughout the tropical waters of western America, but half of them nest in Galápagos. Blue-footed boobies are comical looking and their most obvious feature is of course their large blue feet. The males use their feet to attract females. The brighter the blue, the more likely the male is to be favored by the female.

There were a few blue-footed boobies standing on the rocks at the beach. We happened to witness a male booby wooing the female. The male gradually moved closer to the female, lifting their feet back and forth as if to prove that they had the brightest color. Then the male arched his back and stirred his wings to attract the female’s attention. Unfortunately, the female seemed uninterested and unmoved. 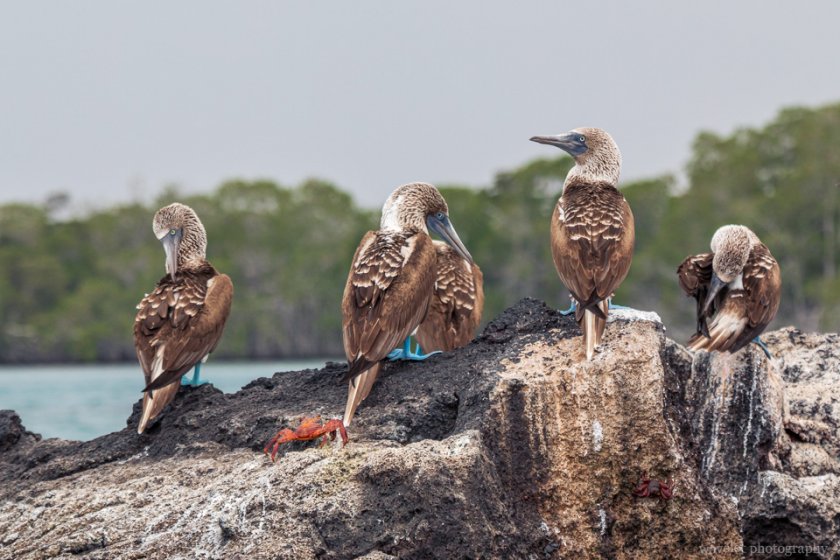 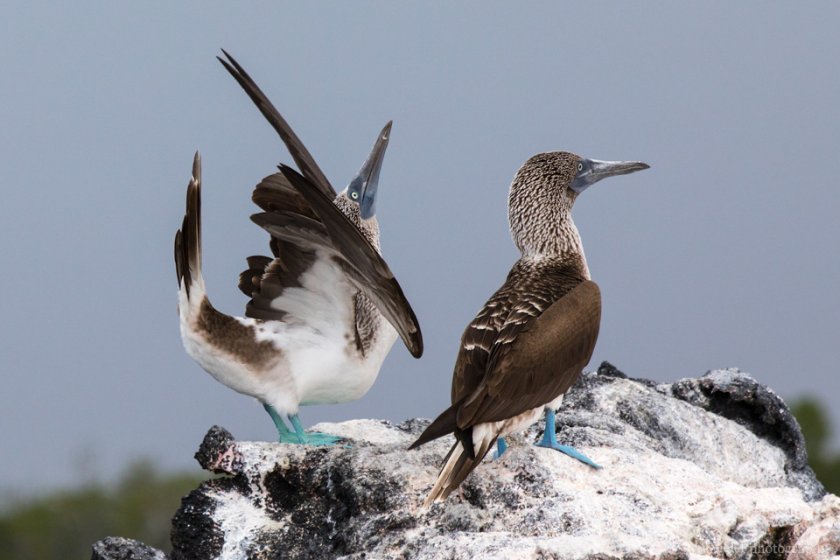 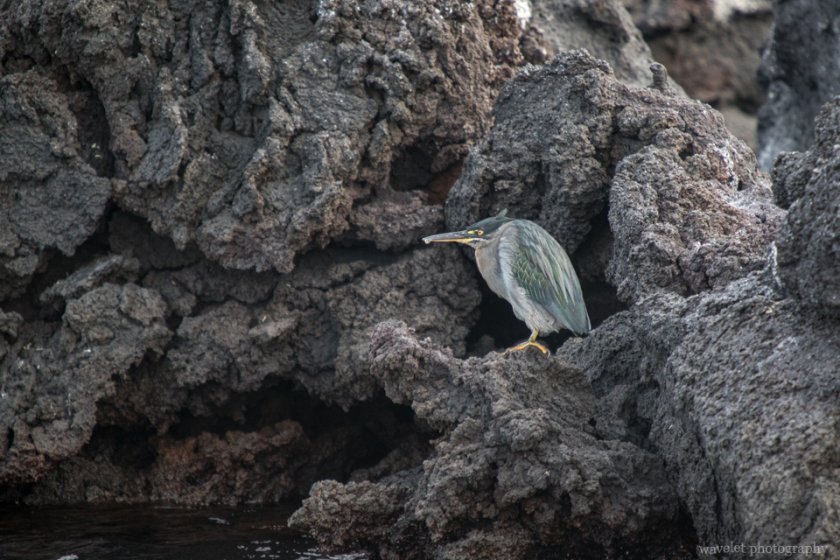 The zodiac sailed into a small inlet bay surrounded by mangroves. Mangroves are able to grow in high salinity water, so they are often found in wetlands along tropical and subtropical seashores, and sometimes grow into forest.

Mangrove is a amazing plant. Usually the seeds of plants are embedded in the fruit. When the fruit falls to the ground and rots then the seeds germinate and grow. But mangrove fruits do not fall off after ripening, and the seeds in them start to grow until they become 20 to 30 cm long. This mechanism to help their seeds to survive is called viviparous. The propagule then drops into the water. It has a similar density to seawater and can floats with the waves to great distance. When the propagule has absorbed enough water, the roots become heavier and it floats vertically in the water. When the tide fades, it can plant itself into the mud and grow into new plant. This cycle repeats itself, and soon the entire mudflat area will be covered with mangroves. Because mangroves grow on the shore, which is frequently flooded by waves, they are generally not very tall and their roots cannot be planted very deep, but they do have well-developed root-like branches that are inserted into the shallows to keep the plants stable. The stilt roots above the soil are exposed at low tide and can absorb oxygen from the air. These distinctive characteristics give mangroves a competitive advantage over other terrestrial plants in the shallow coast. 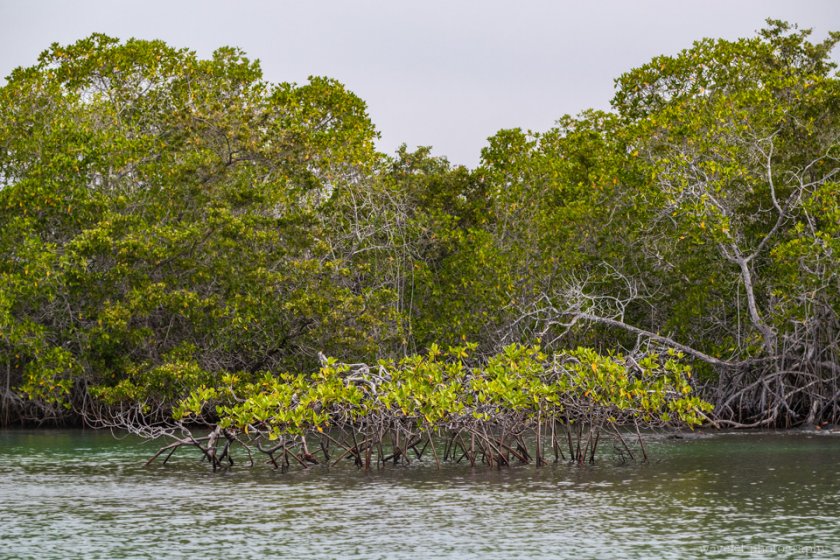 The water in the bay was very calm. There were a few sea lions swimming and playing in the bay and making occasional whimpering sounds. The zodiac took us cruising among the mangroves. When we returned to the boat, we passed through the bottom of the yacht. Our boat is a catamaran structure. The zodiac had no difficulty passing between the two hulls.

Before dinner, Marco introduced us to the entire crew of Seaman Journey. There are only 11 passengers on board, but there are 9 crew members including the guide. Through the narrow hatch and ladder, you can reach the bottom of the boat where the crews were living. The space is quite confined. 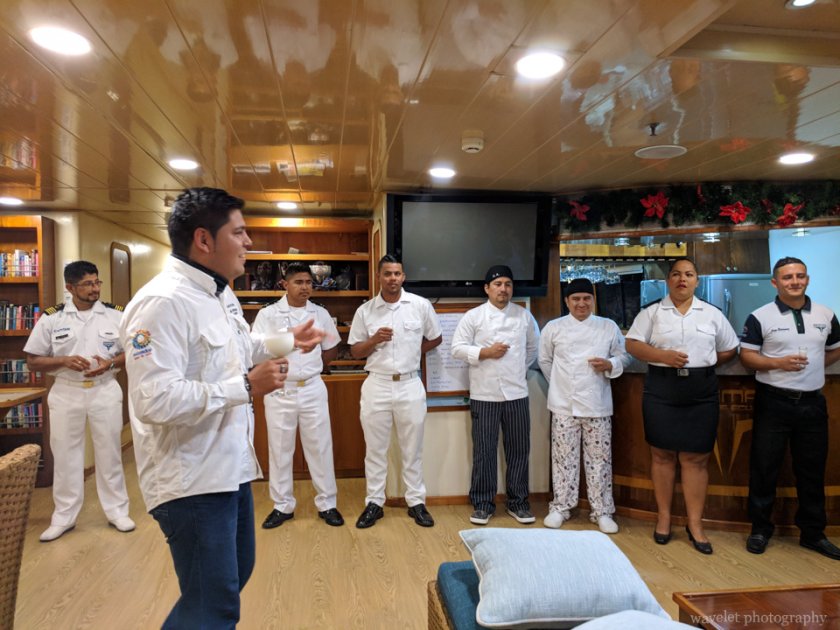 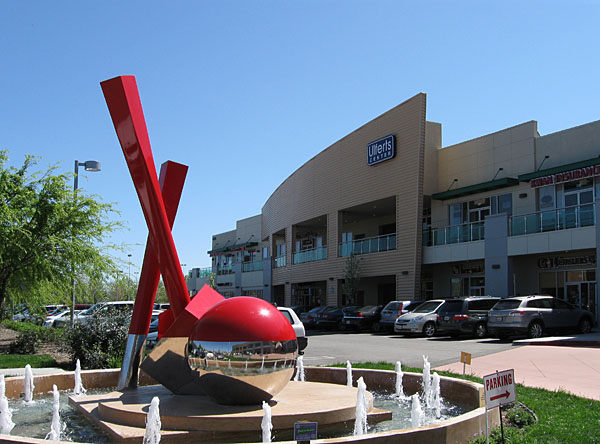 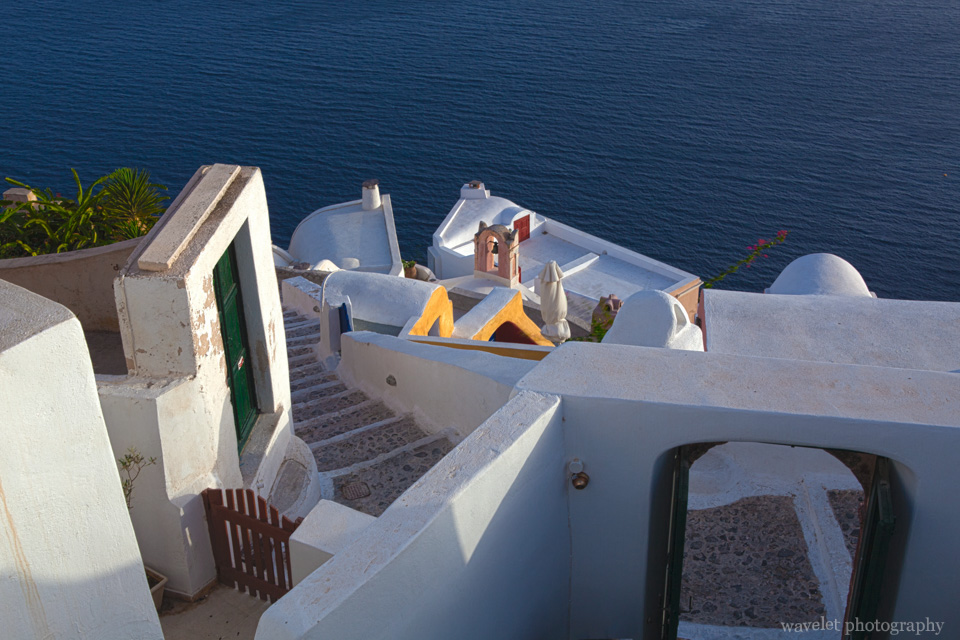 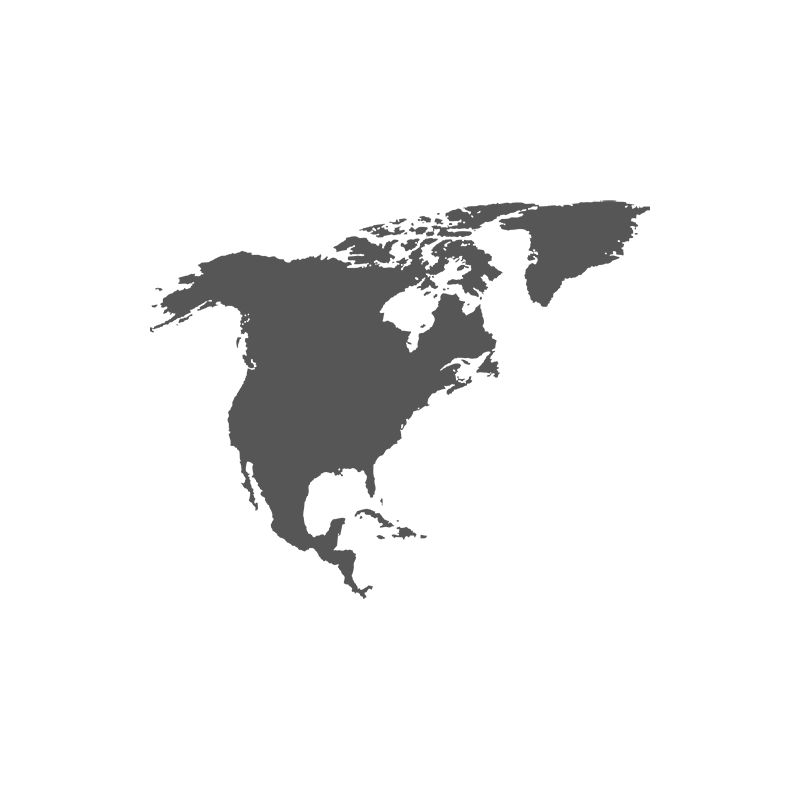 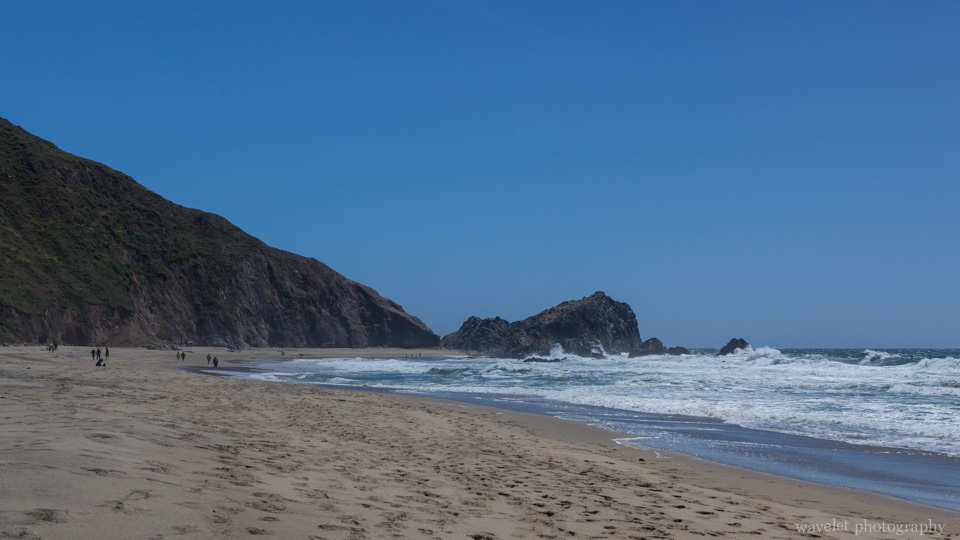 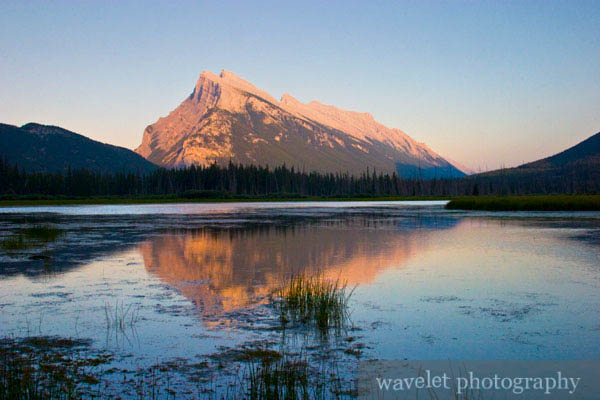 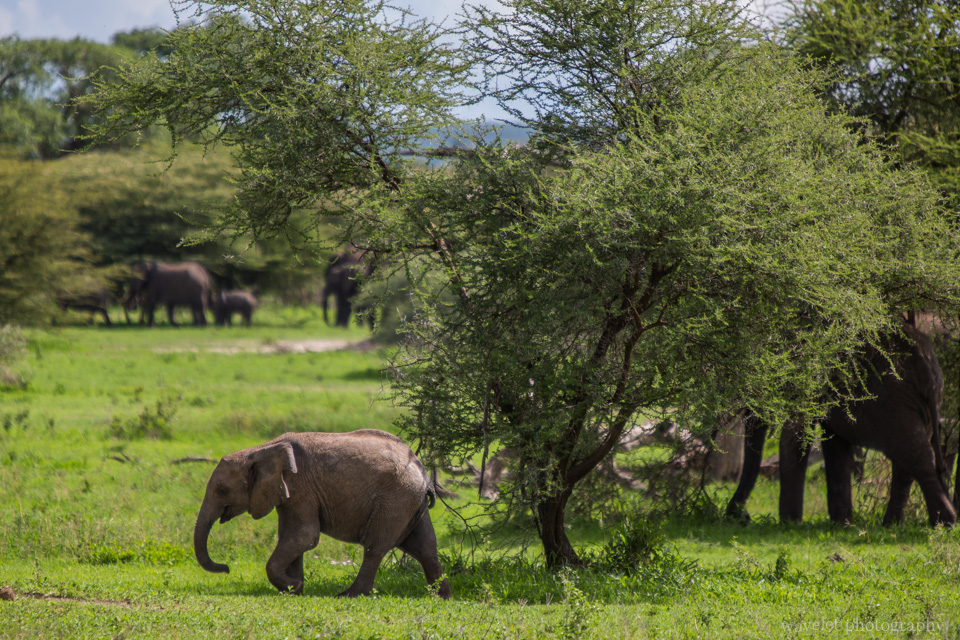 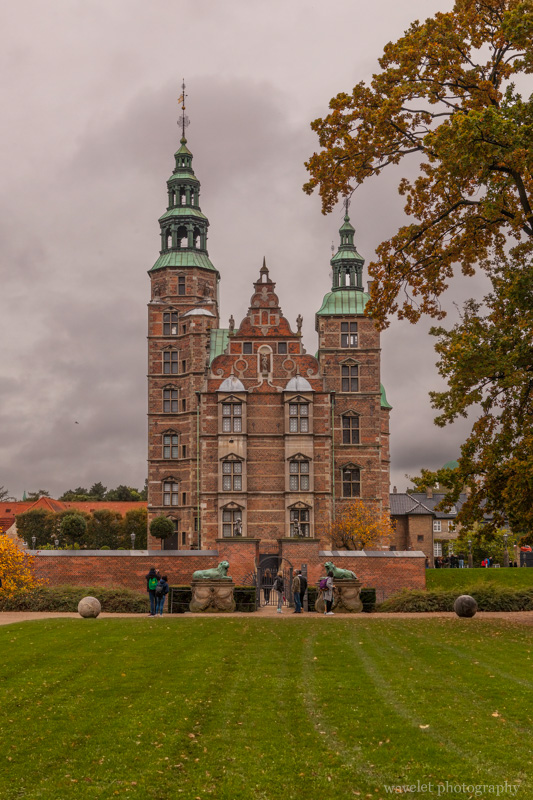 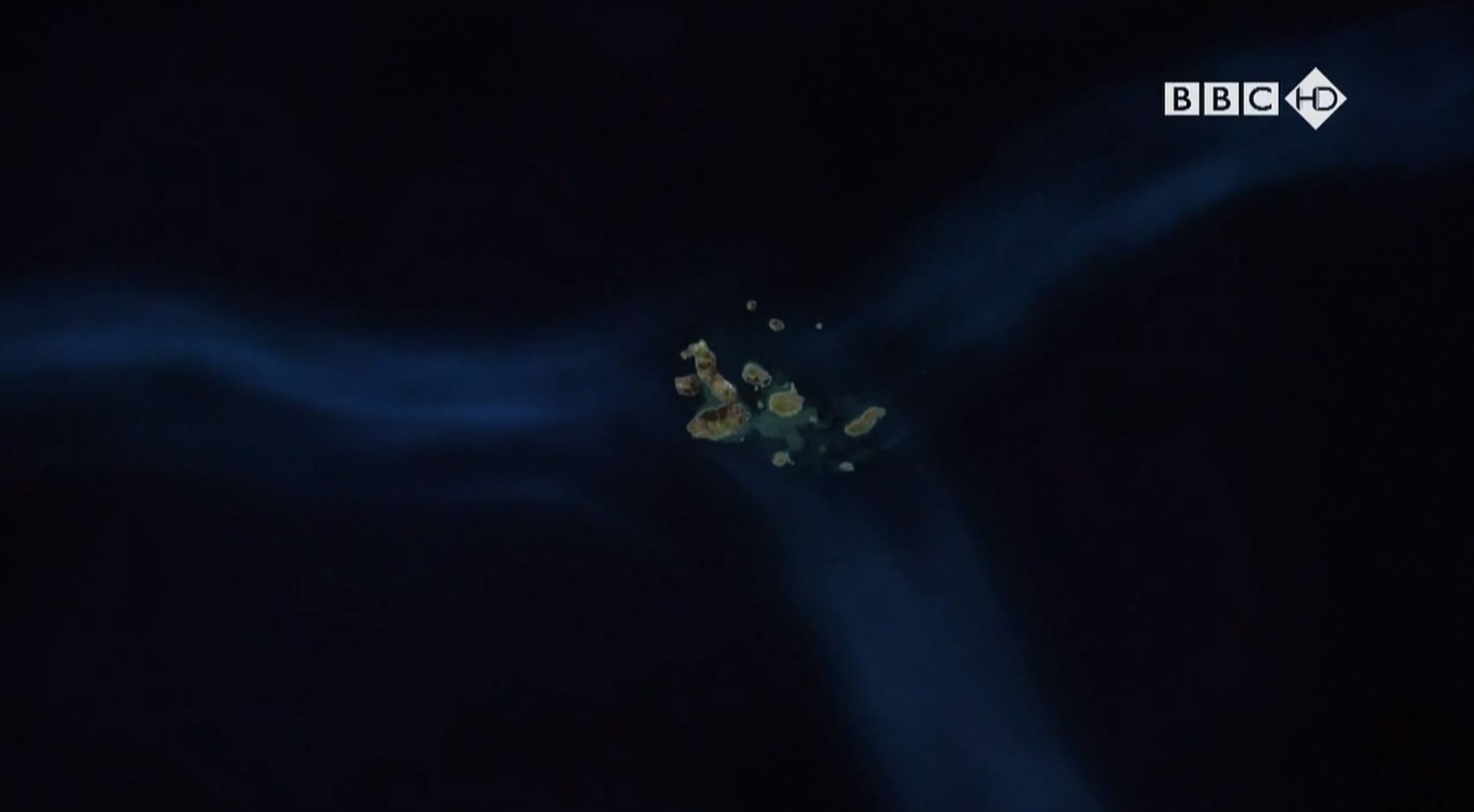 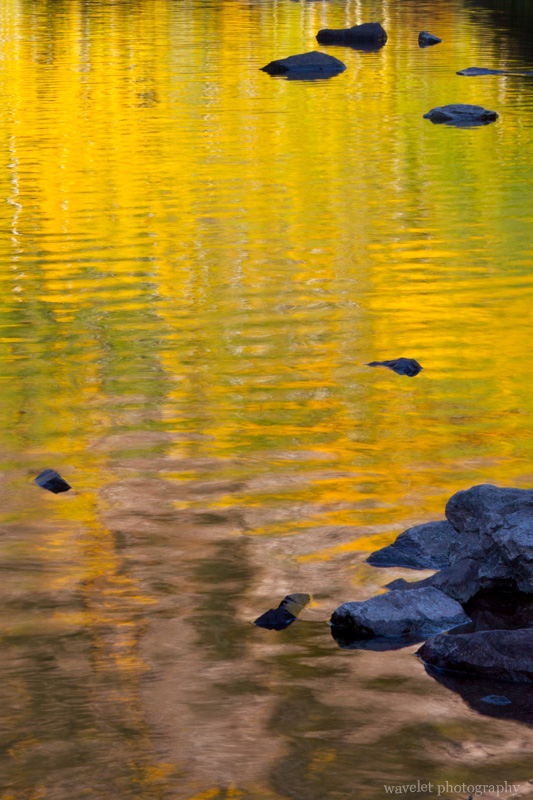 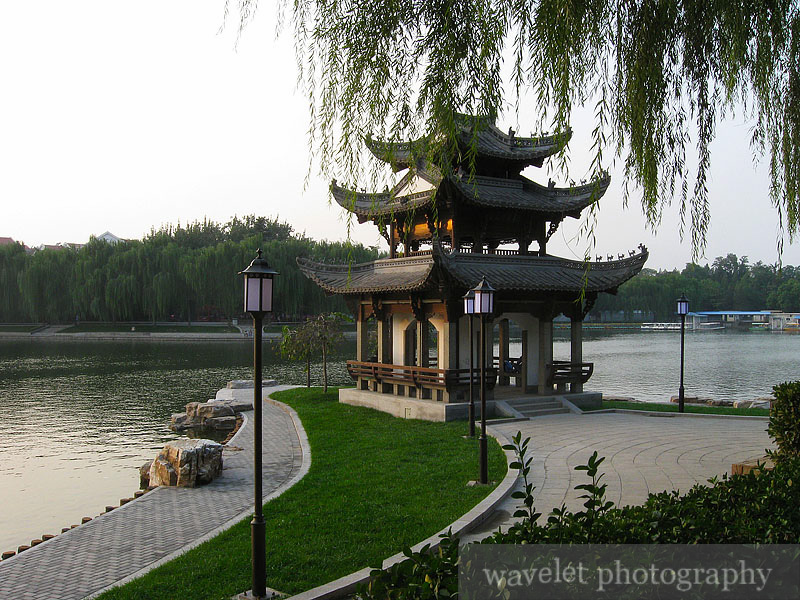 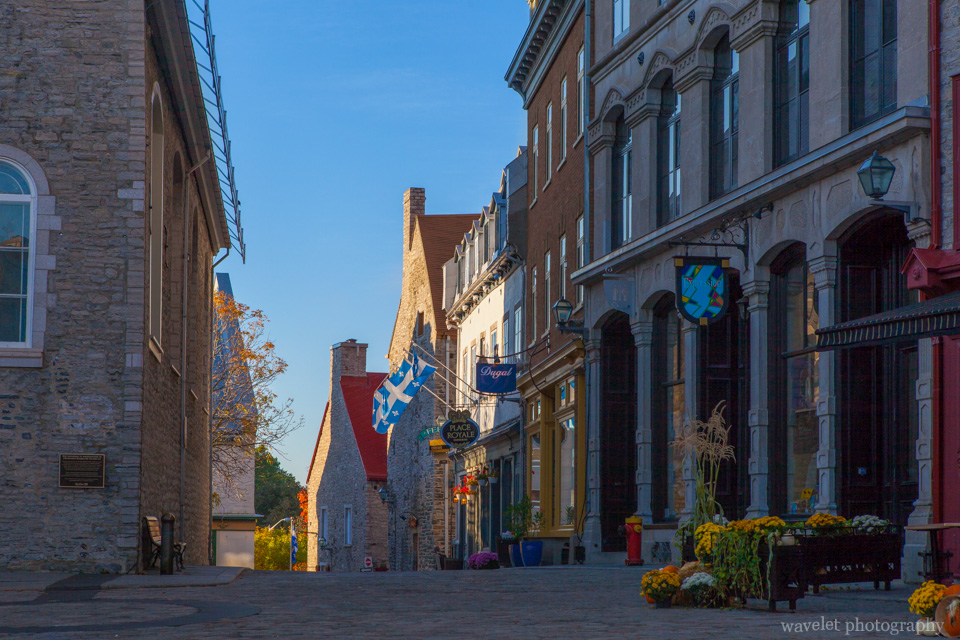 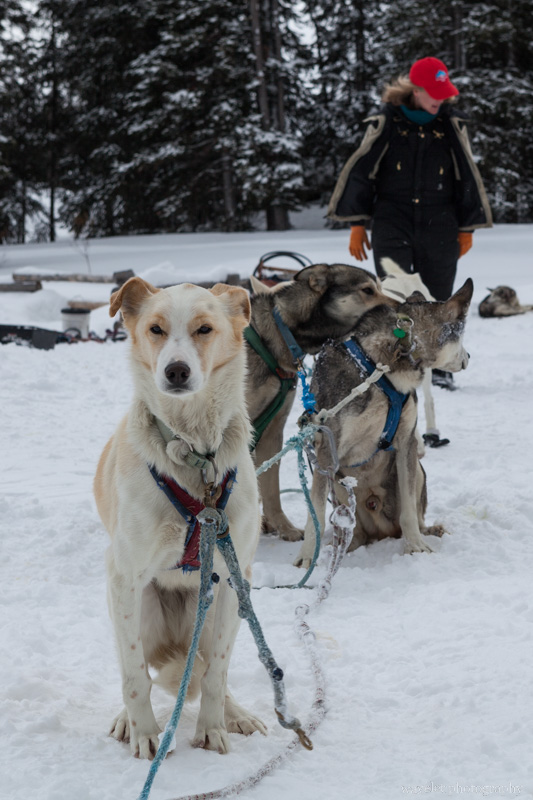 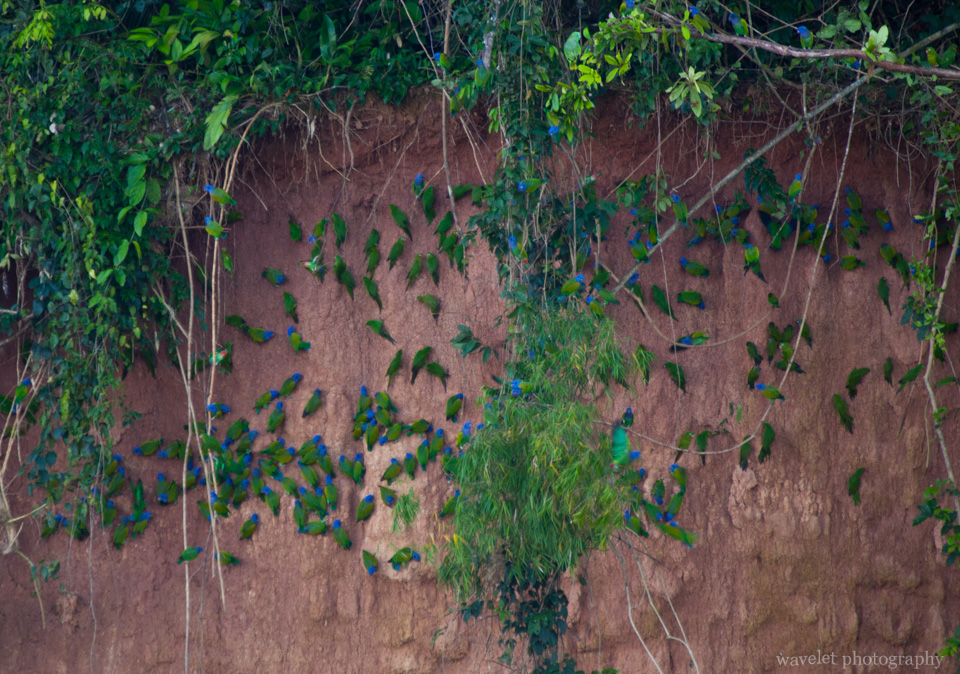 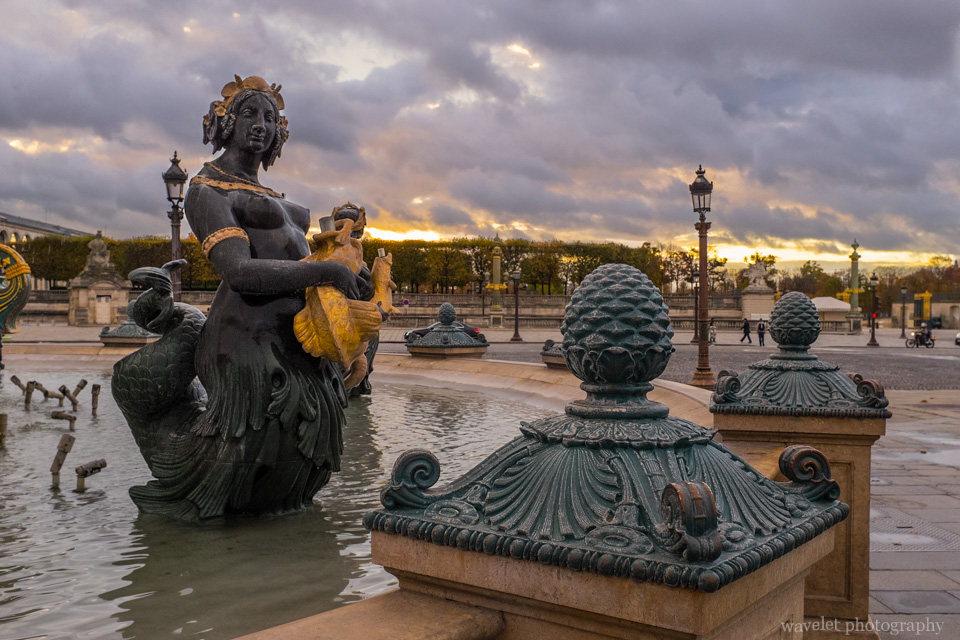 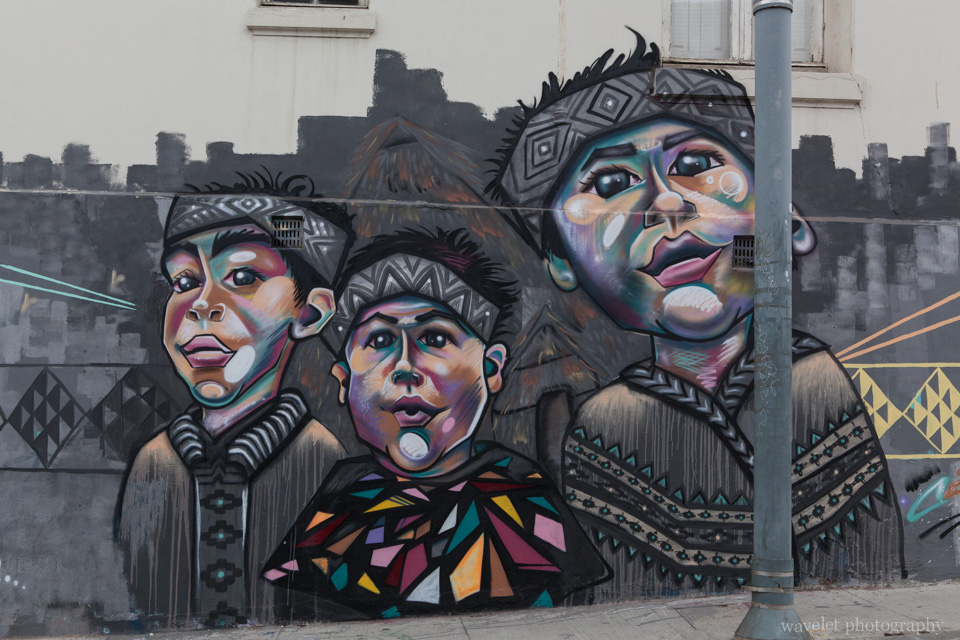 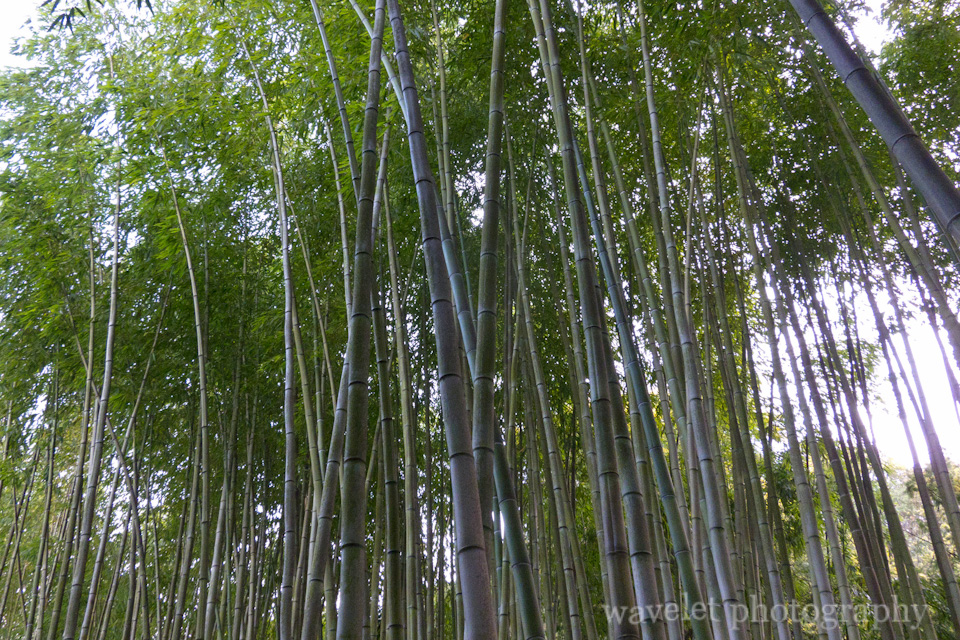 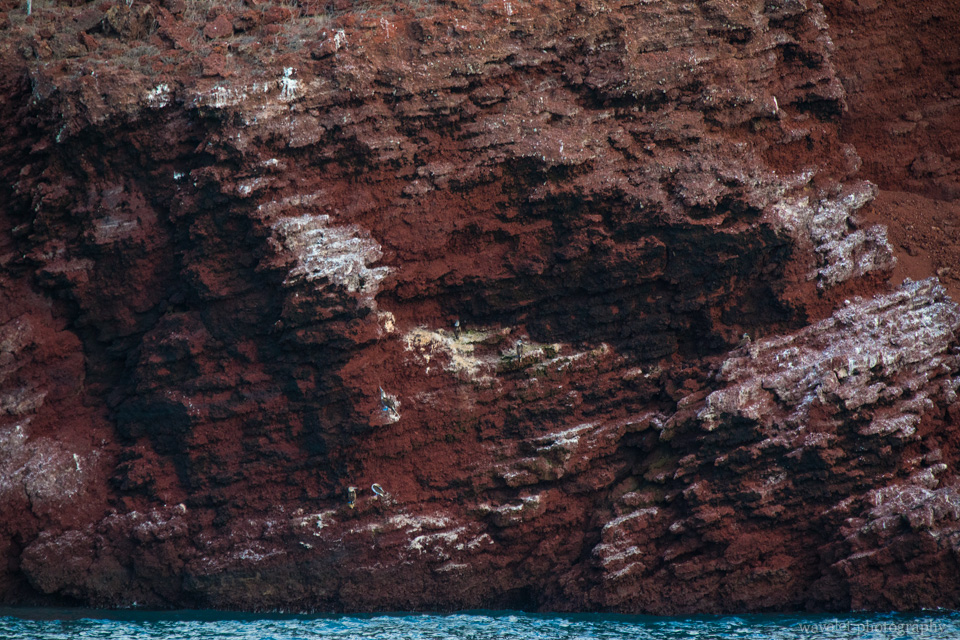 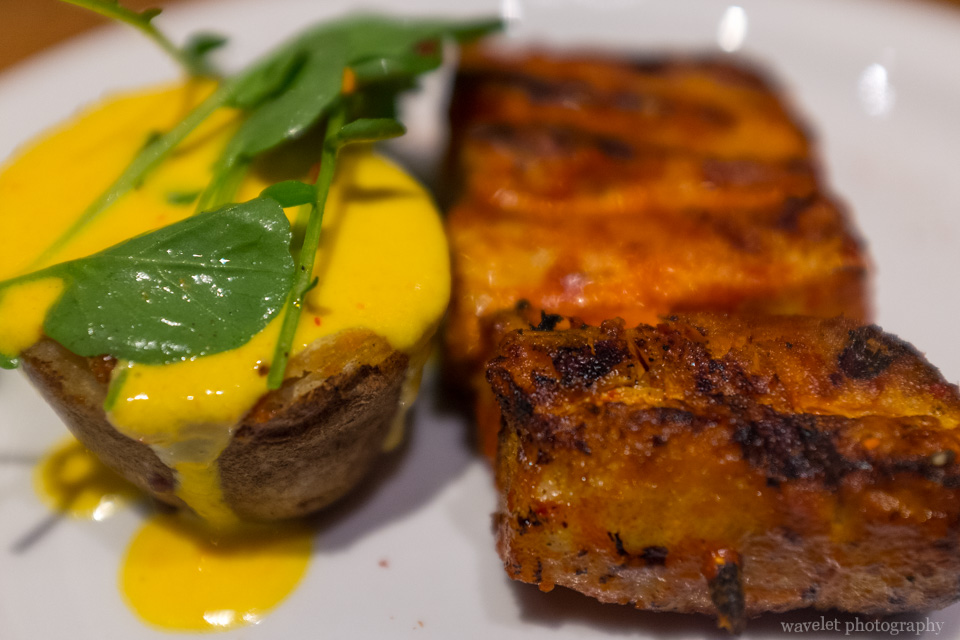 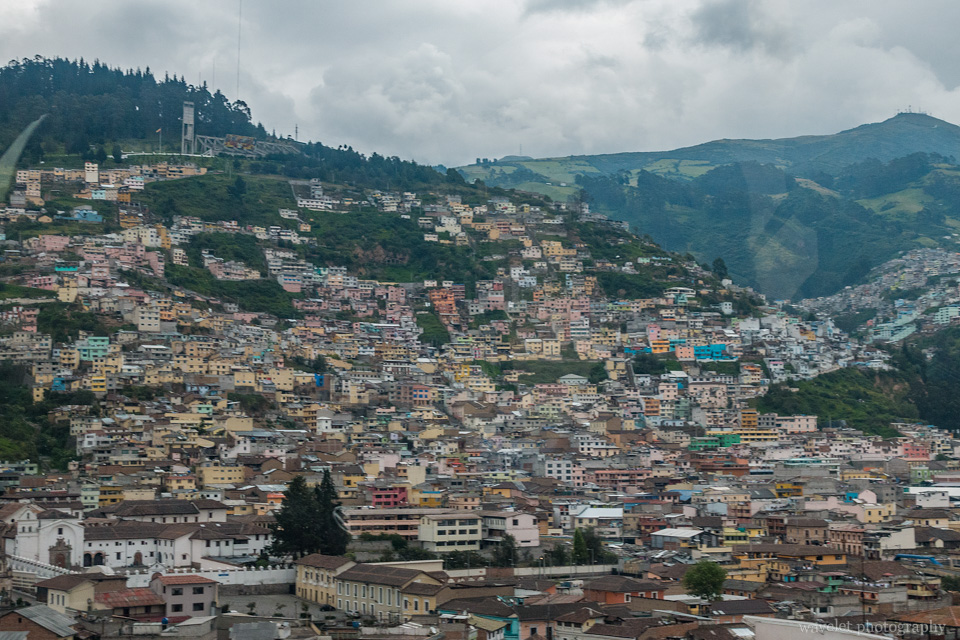